Gautham Gambhir once formed a formidable opening pair along with Virender Sehwag in both ODI and the longer format of the game. To a great extent it was the brisk and steady innings which the duo gave at the start of innings was which helped India to reach the number 1 spot in tests. It was a time when India was looking for an opening partner for Sehwag, India found the answer in Gautam Gambir. The Delhi southpaw often gave India the solid starts and was also equally abled to play the long innings.His long innings for more than 10 hours at Napier against New Zealand will be long remembered. He won the ICC award for best test cricketer in 2009. Gambhir at times lacked the charisma of some fellow great cricketers but he was more than helpful for team than any of those fellow cricketers at crunch times. Gambhir was the top scorer in two world cup finals in which India lifted the cup. Gambhir scored 75 in WT20 final in 2007 against Pakistan, and again top scored with 97 in 50 over world cup final in 2011 against Srilanka. But it should be doubted whether Gambhir got his due importance and accolades . At times his bad temper landed him in match suspensions. His dust-up incidents in cricket field with the likes of Shane Watson, Shahid Afridi are quite famous in cricket circles. We  can go through the best 5 innings of the Delhi opener.


It was the highest score of Gambhir in tests and for the Delhi lad  it aptly came at Feroz Shah Kotla, Delhi. India was leading the Border - Gavaskar trophy 1-0 when the two teams met at Delhi for the third test. Sehwag and David was dismissed early in the Indian innings and there was some bother in the Indian camp. But Gautham Gambhir had other plans and he scored a fluent double century to take India to a mammoth score of 613/7. Gambhir was dismissed for 206.Australian batsmen were equally up to the task and the match ended in a draw. Gambhir was suspended for the next match for elbowing Shane Watson.

It was the final test of New Zealand series in 2009. Gautham Gambhir was in sublime form in the series and ended up as the top run scorer in the series for India. India was dismissed for 379 in the first innings. New Zealand ran into a fuming Zaheer Khan. The speedster picked up 5 wickets and the Kiwis were eventually bowled out for 197. In second innings Gautham Gambhir took the centre stage. The southpaw scored 167 and took the Indian total to 434/7. The Kiwi were set a target of 507. The match ended in a draw. Gambhir was adjudjed as the man of the match. India won the series 1-0. It was the first Indian series victory in New Zealand since 1968. 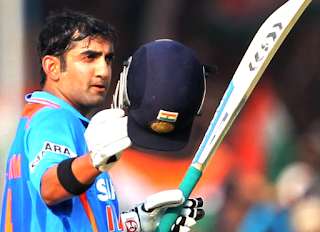 
This is the finest test innings Gambhir has ever played. India had won the first test at Hamilton and were leading the series 1-0.In the first innings Kiwis made 619/9. Jesse Ryder scored a scintillating double century 201 . Ross Taylor (151) and Brendon McCullum(115) also scored centuries. In reply India's first innings ended up in 305. Rahul Dravid(83) and VVS Laxman (76) scored half centuries. India trailed by 314 and the New Zealand captain Daniel Vettori enforced the follow on. India had a difficult task to avoid a defeat. Gautham Gambhir played the test innings of his lifetime when he batted for 2 days for almost 643 minutes , faced 436 balls and scored 137 runs. His marathon innings made sure that the game ended in a draw and India retained the lead 1-0.


It was 2011 world cup final at Wankade. Mahela Jayawardene made a fluent century knock to take Srilanka to a fighting score of 274/6. Indian reply started off poorly when they lost Sehwag off the second delivery of the innings. Again Sachin Tendulkar too returned cheaply and India was in some spot of bother at 31/2. Then Gautham Gambhir stitched a gritty innings of 97. Unfortunately he couldn't reach the century milestone. But before he returned to the pavilion India had reached a strong position. Dhoni was awarded the Man of Match award for his 91, but it was Gautham's innings which provided India the foundation.It was Gambhir's best ODI innings. 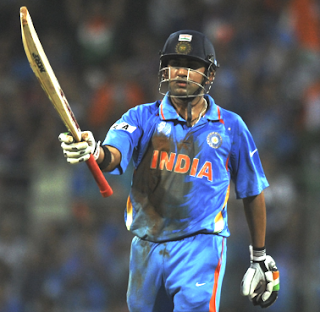 
Gautham Gambhir best T20I innings came against the arch rivals Pakistan and that too at the big stage of World Cup Final. Gautham Gambhir was in sublime form in the T20 World cup 2007 held in South Africa. He was the leading scorer for India in the series. In the final when the big guns failed to score runs, Gambhir came to the rescue of the team scoring a vital 75 off 54 balls. Rohit Sharma scored 30 from 16 deliveries. These innings took India to a fighting score of 157/5. Then it is history that India managed to defend the score and lift
the world cup.

Gautham Gambhir has been the top scorer in both World cup finals that India won and he has been a part of. Gambhir had his share of problems in the initial stages of international career. He was a regular victim of LBW. But Gambhir sorted out the problem and came back strongly.Gambhir played 58 tests and scored 4154 runs at an average of 42.He was part of 147 ODI and he scored 5238 runs at an average of 39.7.Gambhir's graph started to dip in the later stages. Gambhir entered active politics after retiring from cricket and at present he is a MP from Delhi.