Formation of cricket in canada

May 09, 2020
In the present world Canada is not a country which is known for its cricketing skills. The country couldn't even qualify for the recent World Cup event. Cricket is slowly growing in the country, but needs to go a long way. Cricket is not new to Canadians. Cricket was introduced at a very early age in the country by the British. Due to its popularity cricket was chosen to become the national sport of Canada, but the idea was later changed and ice hockey was chosen to be the national sport. But in the time being cricket started to lose its popularity in the American country. It was mainly due to the growing popularity of base ball, one of the favourite games among their neighbouring country USA, among the Canadians. It was more suited for their cold climate. They found base ball faster paced and well suited for them. The US influence too played its part. But today, the conditions are slowly changing. Presently a lot of people are migrating to Canada from the Asian countries like India and Pakistan, and gulf countries. As we know, these regions are well known for the die-hard attitude towards cricket. Presence of these groups in Canada is lifting its cricketing prospects. Most of the team members of Canada are born in above mentioned regions. 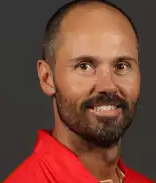 Despite the low profile of Canadian cricket, it will be surprising to know that, the first ever international match took place between Canada and USA in 1844. But the Canadian cricket failed to grow beyond the limits. Even after being one the first countries to play international cricket, Canada continues to be only an associate member of ICC. The Canada Cricket Association was formed in 1892. Canada played in 4 World Cups in 1979, 2003, 2007 and 2011. But the thing is, they never managed to reach beyond the first round in all World Cups. Canada played its first ODI in 1979 world cup, against Pakistan. In 2004 Canada participated in their first ICC Intercontinental Cup. They lost in the finals against Scotland. Canada was the champions in ICC Americas Championship in 2000, 2004, 2010 and 2011. 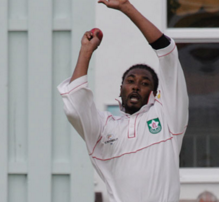 The first ever international match in cricket was played between Canada and USA. The venue of the match was St. George Club Ground, New York.USA won the toss and elected to field. In the first innings Canada made 82 runs. 12 runs made by Winckworth, Sharpe and Freeling were the highest individual score in the innings. For USA, Groom took 3 wickets and Wright took 5. 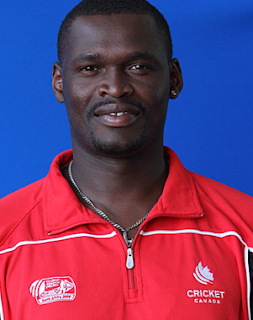 In reply USA made 64 in their first innings with Tinson being the top scorer for them with 14 runs. Winckworth and French took 4 wickets each in US innings for Canada. In second innings Canada managed 63 runs with Winckworth scoring 14 runs. Groom and Wright took 5 wickets each for USA. In the final innings of match, the US reply ended in 58 runs and Canada won the match by 23 runs. In the final innings J Turner was top scorer for US with 14 runs. Sharpe took 6 wickets for Canada. It is a sad story that, the country which won the first international match couldn't replicate the success in the international scene to greater extent.

Canada did not participate in the first world cup in 1975. In 1979 they reached the second spot in ICC trophy held in England, behind Srilanka. Canada qualified for the world cup 1979. There they played the first international ODI, against Pakistan. In the match Canada managed to make 139/9 with G R Sealy making 45 runs. But Pakistan chased down the total in 40.1 overs with 119 balls remaining. Pakistan lost just 2 wickets. In the second game Canada was bowled out for a paltry score of 45.England won the match in 13.5 overs with the loss of 2 wickets and 277 balls remaining .In terms of remaining number of balls this remains as the biggest win in ODIs. In their third outing, they faced Australia. Canada was all out for 105 in 33.2 overs. John Vaughan top scored for Canada with 29.Australian bowler Alan Hurst was the wrecker in chief as he took 5 Canadian wickets for 21 runs in 10 overs. In the second innings of match Australia made 106 in just 26 overs with the loss of 3 wickets. 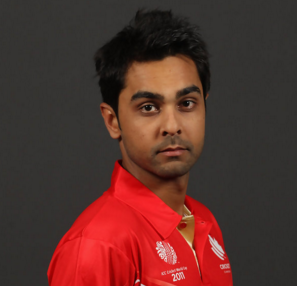 After 1979, Canada had to wait till 2003 to play their next world cup. In 2003 Canada defeated Bangladesh, which was their only success in the tournament. In the first innings Canada was all out for 180 runs. Bangladesh was expected to defeat Canada with such a low score to defend. But Bangladesh was all out for 120 runs and Canada tasted their first victory in World cup. Canadian bowler Austin Codrington took 5 Bangladeshi wickets for 27 runs. In their match against Srilanka they were bowled out for a paltry 36. Srilanka chased down the target with 272 balls remaining and 9 wickets in hand. In their third match against West Indies John Davidson smashed a 67 ball century to help his team reach 202. He made 111 off 76 balls. But West Indies batsmen made a mockery of the target as they crossed the run mark in 20.3 overs. Against NewZealand once again Davidson smashed a quick fire half century but other batsmen let the team down. Davidson scored 75 off 62 balls with 4 sixes and 9 fours. Canada could only make 196 despite that innings and New Zealand reached the target in 23 overs with 5 wickets down. Canada lost the match against South Africa by a large margin of 118 runs. Against Kenya they lost the match by 4 wickets. Kenya reached the target with 9 balls to spare. 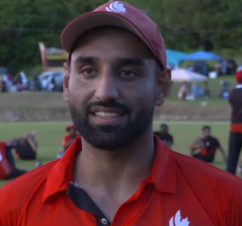 2007 World cup was worse for Canada as they couldn't even win a single match. Kenya defeated them by 7 wickets in their first match. In their second match chasing 279 scored by England, Canada made 228/7. England won by 51 runs. NewZealand defeated them by a margin of 114 runs in their last game of the tournament. In 2011 World cup, their first match was against Srilanka. Srilanka won the match handsomely by 210 runs. Canada was again defeated by Zimbabwe by another huge margin of 175 runs. Pakistan defeated Canada by 46 runs in their third match. Canada did manage to defeat Kenya this time in the World Cup. They defeated Kenya by 5 wickets. Batting first Kenya was all out for 198. Canada chiseled down the required runs in 45.3 overs and 5 wickets down. Henry Osinde of Canada was awarded the Man of Match award for taking 4 wickets by conceding just 26 runs. This was their second victory in World Cups. Canada lost the match against NewZealand by 97 runs and against Australia by 7 wickets. Canada did not qualify for 2015 and 2019 World Cups.

1. John Davidson scored a 67 ball century against West Indies in 2003 World cup, which was then the quickest century in World Cup. Currently the record is held by Kevin O'Brien of Ireland.
2. Anderson Cummins represented Canada in 2007. He had played for West Indies in 1991-92.
3. Highest team total for Canada is 312/4 against Ireland in 2007 at Nairobi.
4. The highest Individual score by a Canadian is the 137 not out scored by Asish Bagai against Scotland in 2007.He has also the most ODI runs scored by a Canada batsman.
5. The best bowling figures of a Canadian bowler is 5/27 by Austin Codrington against Bangladesh in 2003. The bowling effort gifted Canada with their first world cup victory.
6. The highest team total for Canada in T20 is the 196/6 against Cayman Islands in 2019.
The highest individual score for Canada in a T20 match is 101 by Ravinder Singh against Cayman Islands in 2019.

With more people migrating to Canada from the Asian countries, cricket is slowly growing in popularity. Let's hope that in near future we can see the American country reach greater heights in cricketing field. Recently countries like Afghanistan and Bangladesh have done decently well and Canada can draw inspiration from those performances and make it large.