History of Cricket in Olympics


Modern day cricket lovers may find it surprising that cricket was introduced in Olympics way back in 1900. The only cricket match in history of Olympics was played between France and Great Britain in 1900 at the Paris Olympics. Cricket was not much popular among the Europeans and there was not much interest among the participating nations for the sport. Eventually cricket was later avoided totally in the games due to less number of participants at that time. But now the situations have changed, and many countries are advocating the inclusion of cricket in Olympics. In 1900 Paris Olympics , there were two participants for the cricketing event, Great Britain and France. Britain managed a 158 run victory over France. The match began on 19th August, 1900. It was mutually accepted by the two captains to include 12 players in each team. Due to the inclusion of 12 players the match later failed to gain first class status. Batting first Britain made 117. Fredrick Cumming with 38, was the top scorer for Britain in first innings. William Anderson picked up 4 wickets for France in the first innings. In reply French batsmen could only make 78 in the first innings. The 12th batsman J Braid scored 25 for France and was the top scorer. In the second Innings Britain declared their innings at 145/5. France was given a target of 185. In the second innings Beachcroft (54) and Bowerman(59) made half centuries for Britain. 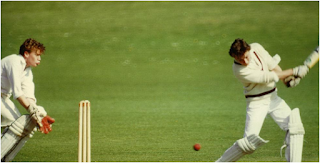 However the French batsmen wilted under the tight English bowling. They lost ten wickets for just eleven runs. Then the last batting pairs of France tried to drop anchor and play out the deliveries. They tried to play out the day and end the match in a draw. But unfortunately for them, the last wicket fell with just 5 minutes left for the close of game. The French innings ended at 26, and handed the British a 158 run victory. None of the French batsmen touched double digits in the second innings. In the first innings Fredrick Christian picked up 7 French wickets for Britain. And in second innings the British bowler Montagu Toller picked up 7 wickets.
So Great Britain is the only team to win a cricket match in Olympic history. The British team members were selected from Devon and Somerset Wanderers. The French team included members from Union  Club and Standard Athletic Club. English players, Montegu Toller and Alfred Bowerman were the only players who had played first class cricket .None of the French players had played first class cricket.

Return of Cricket to Olympics

Recently there has been talks going on, for the re-introduction of cricket in Olympics. There are certain problems associated with such a move. Teams like West Indies and England may face problems in representations. West Indies comprises a number of Caribbean Islands and many of them have individual Olympic associations. But in case of cricket they are represented by the same team. In case of England, they take part in Olympics as Great Britain, which consists of athletes from England, Scotland, Wales and Northern Ireland. But when it comes to cricket, England, Scotland and Ireland have individual teams. Also many cash rich cricket associations had little interest in Olympic participation. Many feared of losing their autonomy over cricket competitions. BCCI from India was not a great supporter of the case in initial stages. But many cricket associations have decided to make a move and introduce cricket in Olympics. It is expected that cricket will be included in 2028 Los Angeles Olympics. Most probably it is the T20 format , which is going to find a place in Olympics. Many cricketing pundits are even suggesting a 10 over game. Let's wait and hope for the introduction of cricket in Olympics.