New Zealand edged India in a final that had its ups and downs in the first innings thanks to a full effort on Reserve Day. The Kiwis made the most of their slim 32-run lead, bowling India out easily in the second innings to set a goal of just 139 runs. New Zealand trounced India by eight wickets at The Ageas Bowl in Southampton on Wednesday, with Kane Williamson and Ross Taylor delivering unbeaten innings of 52 and 47 runs respectively. The Kiwis have won their first world title. Kane Williamson will take the lead from the start to guarantee New Zealand does not falter in the last stage this time.

Winning toss, New Zealand sent India to bat, for making use of the bowler-friendly damp conditions. The Kiwi bowlers responded well to their captain’s decision, by restricting India to 88/3. But then Kohli and Rahane lead the Indian fightback and India reached 149 before losing Kohli to Jamieson. Kiwi pacers tested the Indian batsmen with their swing and length. Jamieson adjusted his length well on the second day of action to trouble the batsmen. Batsmen were made to play more deliveries rather than allowing them to leave them comfortably. At a stage, India was 200/6, but their first innings folded up for just 217, with Jamieson picking up a five-wicket haul. Boult and Wagner picked up two wickets each and Southee scalped one. 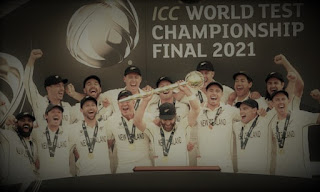 In New Zealand's first innings, the top 3 batsmen made good starts with Conway making a half-century and Williamson making a gritty 49. Latham made a valuable 30 to provide a good start for the Kiwis. But in the middle Kiwis lost some way with Indian bowlers especially Shami, Ishant, and Aswin picking up wickets in regular intervals. At some point in time, it looked as if India will gain some lead. But Indian allowed the Kiwi tail to wag and that cost them dearly. Jamieson and Southee made 21 and 30 respectively and New Zealand gained a crucial 32 runs lead. Jasprit Bumrah bowled well in patches but looked ineffective at times. Unfortunately, the Indian pacer went wicketless in the match. Jasprit Bumrah should not have been selected for the World Test Championship (WTC) final against New Zealand, according to former India wicketkeeper Saba Karim. He alleged that the selectors chose him based on his reputation rather than his present form.

In the second Inning, too Indian batsmen were undone by the Kiwi pacers. Rohit Sharma looked good but was dismissed for 30 by Tim Southee. Indians lost wickets at regular intervals and were dismissed for 170. New Zealand had to chase down the target of 139 on the final reserve day of the match. In the second innings of India, Southee was the wrecker in chief as he took 4 crucial wickets. Boult, Jamieson, and Wagner picked three, two, and 1 wicket respectively. New Zealand lost Conway and Latham early in their chase. But Taylor and Williamson ensured victory for New Zealand without losing further wickets. Williamson displayed great character in leading from the front while making contributions with the bat and making some timely decisions. New Zealand played well to lift the trophy beating India. Many cricket pundits had predicted an Indian win, but the Islanders proved them all wrong. The selection of venue for the final was also criticized worldwide. The selection of England as the venue at this point was truly inappropriate. The match was interrupted by rain and some days were completely washed out. The match was extended to the sixth day which was the reserve day for the test match. But these interruptions could easily hinder the rhythm of players. Now the Indian fans are looking forward to their team in Sri Lanka under Shikhar Dhawan. New Zealand fans, at last, got a world title to cheer about, and it has been fittingly achieved under Kane Williamson.