The 2 test series didn’t go well for the Kiwis. Much was expected from the young New Zealand side, but once again they were deceived by the Indian pitches. This time Kiwis seemed to be ready for the turning pitches of the subcontinent. They had 3 sinners in their ranks, but failed to win the test matches. India registered yet another home series victory against the New Zealanders. The Kiwis hasn’t managed a win in their last 12 matches in India, with their last win coming way back in 1988 at the Wankhede.

The first test match at Kanpur was played on a sporting wicket, and there was equal assistance for both bowlers and batsmen. Kohli was rested and Ajinkya Rahane was leading the Indian side. India managed 345 batting first, riding upon a gritty century by the debutant Shreyas Iyer. The debutant showed great skill and application while making the knock. India were in a spot of bother at 145/4, but Ravindra Jadeja (50) and later Ashwin played played some usedful knocks down the order to take India to a somewhat commanding position. Tim Southee was exceptional with the pace and swing and he took 5 valuable Indian wickets in the first innings. Jamieson too contributed with 3 scalps. In reply New Zealand managed 296 runs. New Zealand openers Tom Latham and Will Young made 95 and 89 respectively to give the Kiwis a solid start. At 150/0 , Kiwis were expected to take a huge lead. But thing went wrong for the Kiwis from there. Axar Patel dismissed 5 Kiwi batsmen, while Ashwin 3 of them to terminate the New Zealand innings at 296. India took a useful lead of 49 runs.

In the second innings, Southee and Jamieson took 5 quick wickets and India were at one stage 51/5. The Kiwis hopes were raised. But once again Shreyas Iyer took the game away from the Kiwis. He made a quality 65 runs. The Indian wicket keeper Wridhiman Saha made a solid 61 and Ashwin contributed with 32 runs. India declared their innings at 234/7. Interestingly the Kiwi spinners Rachin Ravindra and Somerville went wicketless in the match. Ajaz Patel took 3 wickets in the match. In the fourth innings, New Zeland lost the early wicket of Wiil Yong . But Tom Latham and Somerville stood solid and played 146 and 110 balls respectively. When Somerville departed for 79/2, New Zealand has played 35 valuable overs. Then came the skipper Kane Williamson. Latham and Williamson played till the 55th over. After that New Zealand witnessed a minor collapse, when they were made to 155/9 in 90th over. Indians smelled victory in the latter part of the day. But Rachin Ravindra despite his failure with the ball, held one end when he played out 91 important deliveries and kept Indians at bay. When the bad light stopped play, New Zealand had the joy of managing a draw in the first test match of the series. Ravindra Jadeja and Ashwin took 4 and 3 wickets respectively in the 4th innings. The Kanpur wicket was a sporting one and didn’t turned viciously as is expected on the 5th day of a match in India.

Kohli had returned to the Indian side as captain. But this time, Kiwis missed their captain Kane Williamson and Tom Latham were their stand-in captain. India won the toss and elected to bat. The Indian opener Mayank Agarwal made a 311 ball 150 and Shubhman Gill contributed with 44. Axar Patel made a half century. The combined efforts took India to 325. But this Indian innings will be written in golden letters. Interestingly this may not be due to the efforts of the Indian batsmen, but the sheer brilliance of the Indian born New Zealand spinner Ajaz Patel. The Kiwi spinner became the third bowler in history of Test cricket to take 10 wickets in an innings. Ajaz Patel had the figures of 119/10 off 47.5 overs. The English spinner Jim Laker and Indian spinner Anil Kumble have achieved this feat before. The New Zeland first innings was a tragedy. Their innings were ended up for a paltry score of 62 runs. Only Jamieson (17) and Latham (10) managed to cross doule figures. The Indian pacer Mohammed Siraj was the wrecker in chief, with the 3 quick wickets of the top order batsmen. Latham, Young and Ross Taylor were dismissed by Siraj in quick succession. Later Ashwin and Axar took 4 and 3 wickets respectively to restrict the Kiwis to 62. In the second innings, India made 276/7, before declaring the innings. Mayank Agarwal made a half century in the innings. Ajaz Patel took 4 wickets and Rachin Ravindra took 3. But the failure in the first innings hurt the Kiwis badly and there was no escape from it. The Mumbai wicket had more turn and assistance for spinners than the Kanpur wicket. New Zealand had to chase down above 500 to win the test match or play down more than 2 days to draw the test match. Both seemed to be impossible or unrealistic. The writing was on the wall. Only Daryl Mitchell (60) and Henry Nicholls (44) managed to put up some resistance. The New Zealand innings ended up in 167 runs. India managed their largest victory in terms of runs. India won by 372 runs. 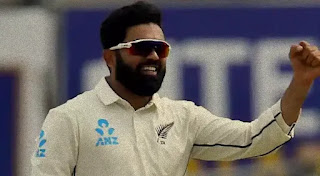 So once again New Zealand failed to overcome the Indian barrier. India won the series 1-0. India came close to victory in the first match too. But India is concerned about the current form of their batsman Ajinkya Rahane. Virat Kohli needs to find a big score. Shreyas Iyer made a good debut. Mayank Agarwal too made a century. But these batsmen need to adjust to the bouncy and swinging oversees conditions. They should not be carried away by these small successes. Indian management did well to rest Bumrah and Shami. The Indian players need to be given such breaks. The continuous schedules are take a toll on the physical and mental wellbeing of the players.

Email ThisBlogThis!Share to TwitterShare to FacebookShare to Pinterest
Labels: New Zealand Vs India