India's Loss to South Africa in ODI: A Review

The ODI series versus South Africa was an unforeseen tragedy for team India and coach Rahul Dravid. India lost the series 3-0, and experts including the Indian coach believes the first and third matches were lost due to "bad shots." The recent ODI results of the current South African team hasn’t been enviable. India wasn’t expected to lose the ODI series, in this manner.

Shikhar Dhawan and Virat Kohli kept India's pursuit on course in both games, but neither batter was able to turn their half-centuries into massive knocks. In the absence of Hardik Pandya and Ravindra Jadeja, the middle and lower-middle order struggled to complete the task once Dhawan and Kohli were dismissed. But again India need to look into better options than Hardik Pandya, because of his inability to bowl. India cannot afford to play Hardik as a pure batsman. India has better options of pure batsmen.

In one-day internationals, India always start slow, preserving wickets. "We certainly could perform more in the middle overs," Dravid remarked when asked if they should tweak the template. We understand the blueprint, and a major part of that blueprint is determined by the composition of your team. Some of the players who help us balance the roster and provide all-around possibilities at Nos. 6, 7, and 8 were unavailable for selection. When they return, maybe it will give us a bit more depth, allowing us to play in a somewhat different way.

The Indian spinners were outbowled by their South African peers throughout the tournament. The Indian spinners are failing to be a real threat to those foreign batsmen even on the subcontinent pitches. Indian which boasted of some quality spinners like Bedi, Prasanna, Chandrashekhar and Kumble in earlier times, now fail to produce such spinners who are feared by the opposition batsmen.

The team needed to improve their wicket-taking in the middle overs. In the third ODI, India attempted something different: their seamers hit the deck more regularly than they had in the first two games, and they got marginally greater results. During the middle overs, India will most likely need to strengthen their wicket-taking alternatives. Spinners assume a significant role in this.

Prior to the tournament, stand-in captain KL Rahul stated that Venkatesh Iyer will be the squad's sixth bowling option. Iyer, on the other hand, did not bowl an over in the first ODI, but he did deliver five in the following before being kept out for the third.

There has also been some debate about Iyer's batting position, but Dravid stated that the team administration was "quite explicit with him" about his purpose in the team.

For KKR [in the IPL] and at times for Madhya Pradesh, he batted towards the top of the order, however he has also batted in the middle order for MP. The Indian team was hunting for a No. 6 bowler who could provide a sixth bowling option. Because they had a lot of alternatives at the top of the order right now, especially when Rohit returns, that was the job they assigned to him. But Venkatesh Iyer who was selected to the team purely on the basis of his heroics in the IPL, failed to deliver the goods. India need to have a better option as an all rounder.

Deepak Chahar's batsmanship in the final ODI was one of the few bright spots for India in the series. India were 223 for 7 at one point in their chase of 288, but Chahar, who was playing his first game of the series, smashed 54 off only 34 balls to get them near. In Sri Lanka, he had pulled off an identical chase, but India ended four runs short tonight. Chahar and Shardul Thakur, who played as seam-bowling allrounders and scored 50* and 40* in the first 2 ODIs, were praised by Dravid. It's wonderful to have players like Chahar and Shardul, who have shown they can contribute with the bat in recent games. Players like these, who can impact with the bat at a lower level, make a huge influence. 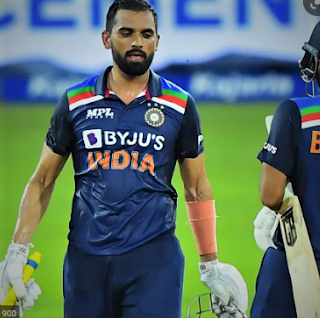 Except for Surya's chance in the 3rd ODI, India's middle order has remained unchanged. Aside from that, they didn't make any changes to the batting order. The team's management wants to provide them with a steady run and a sense of stability. When you give people that, you have to demand performances, and big ones at that, because that's what people expect when they play at this level for their nation.